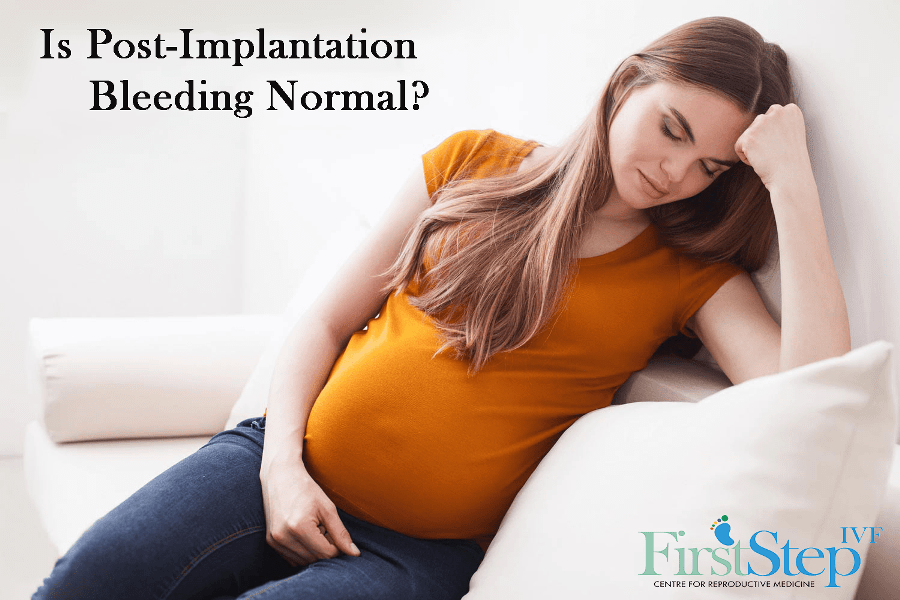 Approximately three out of every ten women experience bleeding after implantation, as it is considered one of the simpler indicators of early pregnancy. However, this is not always due to implantation and is usually not related to pregnancy problems.

What are the reasons for it? How is it different from that of a regular period?
The process of cell division begins with the fertilization and joining of the egg with the sperm, which will produce a fetus or embryo. Eventually, the fetus develops and moves from the fallopian tube to the uterus, where it is implanted. Once fertilization has taken place, this process covers between six to ten days, and when this happens, the fetus is made up of a mass of cells sticking to the lining of the uterus.

A complex system of arteries, veins, and blood vessels irrigates this body area, as the tissue is especially prepared to sustain the embryo and promote its healthy development. Therefore, due to fetal implantation, some vessels can be broken in the process, resulting in some blood loss and consequent spotting. This is called implantation bleeding and can occur between 10 and 14 days after conception because it takes a long time for the fetus to reach the uterus.

How does bleeding occur after implantation?
Bleeding post-implantation usually occurs in the initial stages of pregnancy as the uterus is supplied well by blood vessels and is hence more vulnerable to bleed easily. The small veins and arteries of the endometrium get broken when the fetus sticks to the inner lining of the uterus, resulting in causing bleeding.

The embryo or fetus must be perfectly associated with the endometrial tissue to ensure the exchange of nutrients in the delicate gestation process, likely to occur in the following months. Therefore, the fetus breaks the superficial capillaries of the endometrium to form some new cells that will join it and feed the fetus through the future placenta.

The blood lost in this process is what we term implantation bleeding, and that it slightly varies from menstrual blood. However, this is not always indicative, because the endometrial tissue is sufficiently watered by blood vessels and may be lost due to other equally natural reasons.

How is implantation bleeding dissimilar from menstruation?
Implant bleeding is usually not considered dark, it is usually lighter in color, finer in texture. Usually, it is lighter than blood during menstruation.

These two types of menorrhagia are sometimes easy to confuse because they happen at the same time. However, the most significant difference lies in the color intensity, which is significantly lower than during normal menstrual periods, and the duration, which lasts for a few hours or sometimes may extend over several days with slight and intermittent spotting.

Does it risk pregnancy?
Certainly not. We did not find any evidence that implantation bleeding is related to problems or abnormal pregnancy.

In addition, this type of bleeding is not even related to miscarriage or any other risk to the baby. Ectopic pregnancies or miscarriages can often occur without any bleeding. Therefore, there is no need to associate one phenomenon with another.

What to do at the time of bleeding?
Although taking special measures is not required, it is always advisable to consult your gynecologist, who can then determine if the bleeding is caused by the fetal implant. In addition, the gynecologist will advise how best to proceed. However, in most cases, implantation bleeding normally causes no more than little discomfort. Therefore, it does not usually require any additional attention.

Facing issues related to infertility? Visit the best IVF in Delhi to get expert advice and assistance to accomplish your dream of parenthood. The journey of fertility will be taken care of by our Fertility expert team. For more information, contact the experts at First Step IVF today.